You are not connected. Please login or register

» Discussions About Electronics » Projects made in SimulIDE » 74HC181 ALU 8-bit

Nice.. that will ensure it works for everybody out of the box.

Well, it is working, just started it first time and bingo it's counting up/down
Tomorrow after more testing and replacing 573 with 373 I'll put it in projects, with simu and .bin/data-files.
Why did you give it a data-file extension by default (when saving in Simulide) when bin is also good, if I may ask? Yes, I know now, I can also save it as bin but don't see the difference and the purpose of it yet. 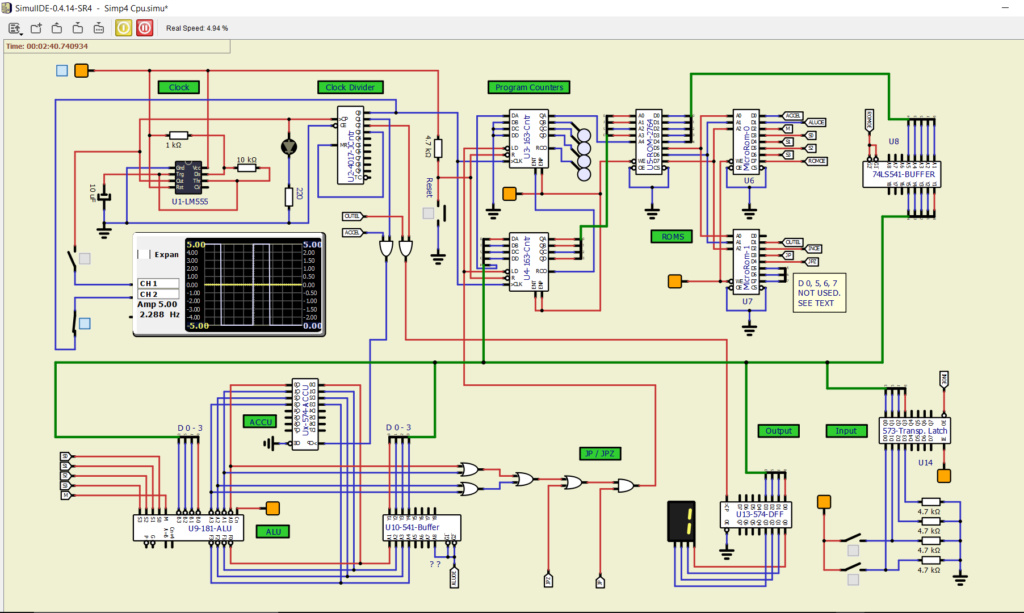 Time clock in drawing field, I would rather see it in the upper bar next to the Speed percentages.
Small monitor you need every space there is. Not complaining though, Simulide showed once more it is capable and has the components available to do a good simulation.

Why did you give it a data-file extension by default (when saving in Simulide) when bin is also good, if I may ask?

A default is useful. And plain text format was the first to be implemented.
Plain text is also easily readable in any text editor.

Binary format is more efficient, smaller files, faster to load and save.

So each format has it's own good and bad things
But you  can load / save in whichever you want.


Time clock in drawing field, I would rather see it in the upper bar next to the Speed percentages.

There is no space.
There is not only time information there, also MCU model and speed.

And in next versions upper bar gets crowded: 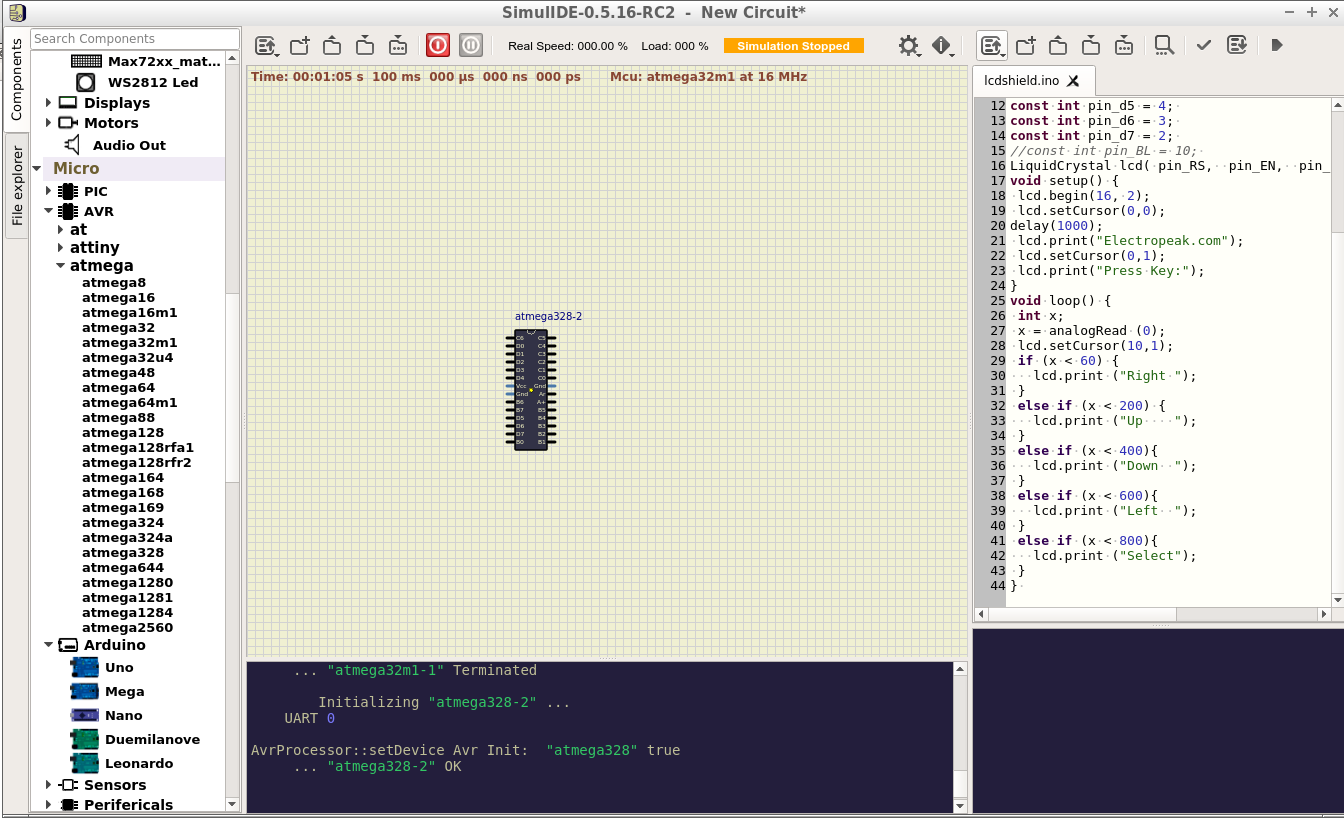 Anyway i'm still thinking how to re-organize all this info.

Sorry and thank you.
Sorry because maybe I was a little bit complaining. Didn't realise the Time was also used for Mcu's and I measured it, the Time field takes only 3 mm out of the 180 mm drawing field on my screen, so that's peanuts.
And as beginner with the Rom/Ram Memory component I found it hard to recognise Data, Bin and Rom-files, that they can be used also I mean. That is nobodies fault except mine, for still not knowing these basic things.
And thank you for explaining, and take it easy with too many changes at once, everything looks fine to me and I like it already very much the way it is now!

Of course I am not the only user and development is a non-stop growing process but in my opnion there is no need for a big overhaul and certainly not over one night.

I made some changes in the MP4, replaced 573 with 373 and that seems to be going fine. I placed variable resistor at LM555 to make this MP4 a little bit more interactive. It is not doing much, it counts up to F and back to zero. Seems like a awfull waste of chips to accomplish such outcome.
But of course, it is meant to be educational and to show the basic principles of Cpu. And for somebody who is more into programming than me it is a nice project to look at more closer.

There is another Rom-file, it's called input-test.bin
Doesn't do much, saw the display change from 0 to F and that's it.
The author did not describe what it should do as far as I have seen, to know that for sure one should read the code I guess.

Other findings: Speed is fluctuating heavily, from 98% to 65 to 6%
And Count Up goes faster than Count Down. 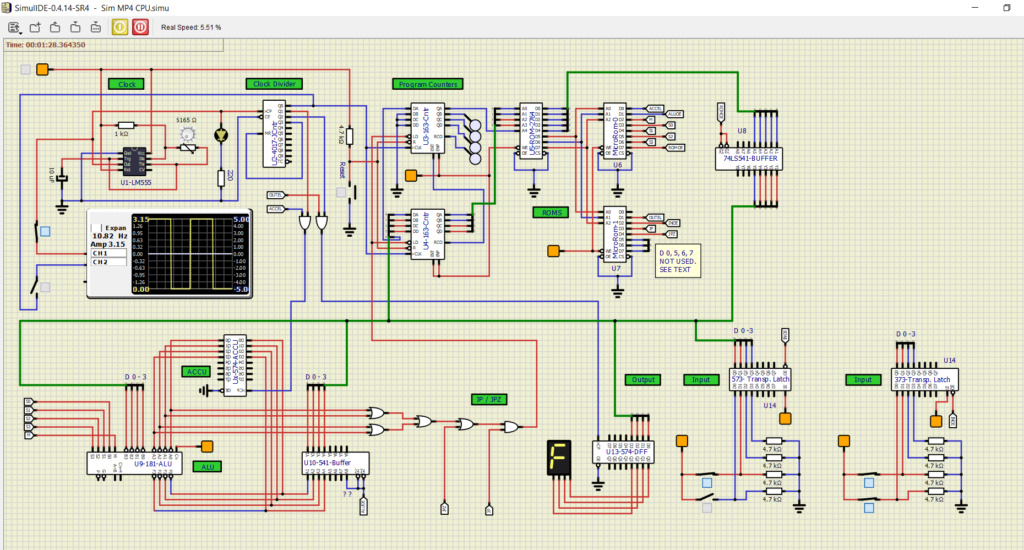 To increase the simulation speed, I recommend removing the LM555 clock generator circuit and replacing it with a Clock generator with a fixed frequency. If you need to change the frequency of the generator during the simulation, you can add a chip with a frequency divider, for example, 74HC193. On this chip, you can make a divider from 2 to 16. I think that's enough. There are many divisor schemes on the Internet.

Yes, thank you, I thought about that but because this is a smaller project I kept the LM555.
And everybody is free to make the changes they want of course

Like adding and trying a single step clock pulse.

I wanted to edit my previous post about 'findings'
I noticed that the simulation has sometimes different responses to different frequencies.
For example, I set the variable resistor at 2205 Ohm and it counts skipping 2, like 4-6-8-A-C-E and it doesnt go backwards anymore but restarts at zero.
Overall it is performing as shown it the original, see also the video
https://www.instructables.com/Simplest-4-Bit-TTL-CPU/
Maybe this different response has to do with the coding and not with the simulation. Or maybe I should have closed and re-opened the program or maybe I missed a wire or tunnel somewhere.
At 180 Ohm it's doing very well continuously, and fast.

Anyway, again I enjoyed making this with Simulide, thank you very much.

Ps to other readers, the files are here:
https://simulide.forumotion.com/t155-sim-mp4-cpu

» Discussions About Electronics » Projects made in SimulIDE » 74HC181 ALU 8-bit